By now I’m sure you’ve heard all the buzz about adding biochar to your garden soil. But, I thought, how much difference could it really make? I’ve been working for years on the soil in my garden. It’s full of organic matter from homemade compost and carefully mulched. I fortify it with kelp and fish meal. The worms seem to love it.

In order to test it out, I planted ten seeds of ‘Black CoCo’ beans in each of two identical slightly raised 3’x3′ beds that held onions until July. I added compost, fish meal, kelp meal, and a small cupful of Sure Start to each bed. Then I added a quart of Soil Reef to only one of the beds. (Just for the record, I have no connection with Soil Reef, or it’s makers. And Soil Reef does contain compost and worm castings along with the biochar.)

In each of the beds 8 of the 10 seeds I planted germinated over a span of 12 days or so, The young plants did well in both beds, though the Soil Reef beans seemed perhaps a bit greener than the untreated bed. Then it got really hot and dry and I got very busy with work and couldn’t water nearly as much as I wanted to. 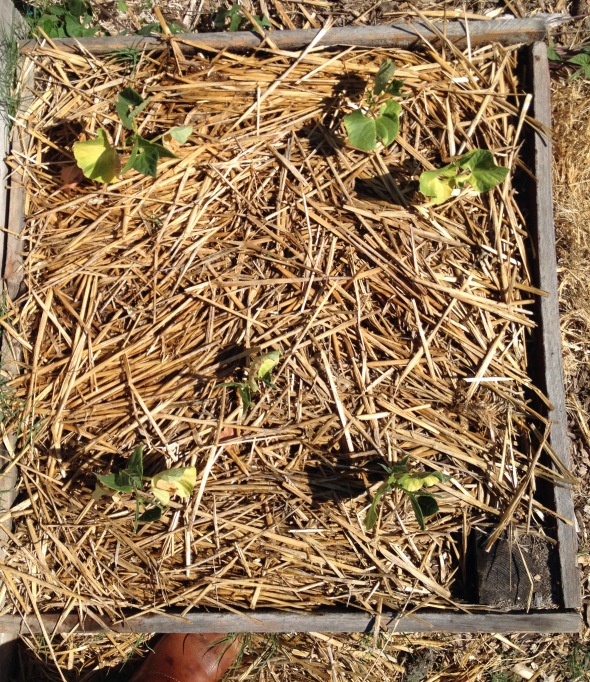 The smallest of the seedlings died and the others lost several of their leaves. In the regular bed, that is. Both plantings were lightly mulched with straw before germination and then more straw was added to retain moisture after the seedlings were up. This was not enough to sustain the beans planted in my usual soil mix very well through the drought. And the Soil Reef patch? A leaf or two was lost there as well, but the plants are bigger, greener, and much more vigorous.

These two pictures were both taken today. I left the toe of my shoe showing in both shots to give you a size reference. The leaves you see on the bottom left corner of the Soil Reef patch are sweet potatoes. And they present our second potentially confounding factor. Both bean patches are adjacent to a large rectangular sweet potato bed, in my standard soil mix. And it just so happens that the end of the sweet potato bed nearest the unhappy CoCo beans is not growing as well as the end near the happy, Soil Reef CoCo beans. There is also a large sunflower near the sad bean patch, which may be hindering the growth of both the beans and the sweet potatoes.

Even with the usual confounding factors found in the average urban garden, this experiment looks well worth repeating to me. What about you? Are you adding biochar? What sort of results have you had with it?

Starting potatoes from true potato seed (TPS), takes some patience, good eyes or magnifiers, and a sense of adventure because when you grow potato plants from seeds, you don’t really know what you’re going to get. This year I am growing TPS of ‘African Prince’ and ‘Chaposa’, both from New World Seeds and Tubers. I’m also growing TPS I saved myself from the ‘Long, Tall, Red’ potatoes that looked so promising in our trials for productive small-space varieties. 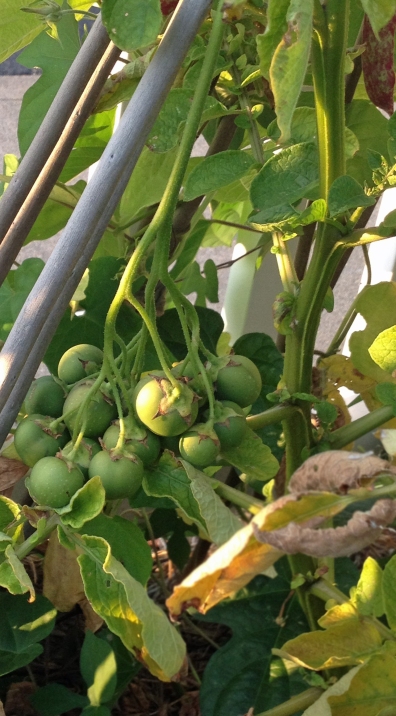 Potato seed is produced in small, round, usually green, berries that are reported to be highly toxic.

The seeds were started on August 1st in peat pots under lights and watered from the bottom. The first ones sprouted after ten days.

Now that some of the seedlings are about 2″ tall, I am potting them up into regular containers in potting mix. 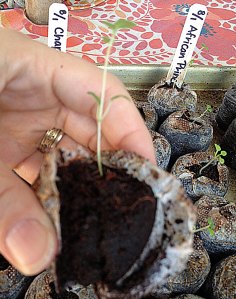 The first step is to cut the netting that holds the peat pod together. Carefully unwrap the pod holding the ball of peat cupped in your hand so you don’t dislodge any of the roots formed by the potato seedling. Next, gently place the peat pod into the pot on top of a thin layer of soil.

With the fingers of one hand around the tiny potato plant, slowly add soil around the peat pod and up the stem of the potato plant, in effect ‘hilling’ your new potato plant for the first time. Leave a bit of stem and the top leaves above the soil line just as you would in potting up a tomato seedling. (Potatoes and tomatoes are close relatives and have many of the same growing characteristics.)

Your TPS seedlings can be hardened off and transplanted outdoors where they will grow into larger vines and produce tubers. Or they can be grown in small containers and allowed to set a few mini-tubers that you can then select for specific characteristics and grow out only the ones that look promising for the skin color, shape, etc. you want to grow. TPS presents the gardener with lots of possibilities which is one of the things I enjoy about it most.

What happens if you take five ‘German Butterball’ seed potatoes and grow them, with minimal inputs during a very hot and dry year, in a 3′ x 3′ space hilled with compost and hay three times over the growing season? Well, it turns out, surprisingly wonderful things!

For several years we’ve been trying different potato varieties to see which ones have the best potential to grow vertically in a small space. ‘German Butterball’ certainly proved to be a contender this growing season.

This tiny (barely 9 square feet) patch of basically untended potatoes produced a total of 59 tubers! 14 regular eating size for the variety, 14 small, 15 mini and 16 micro tubers. The vines grew over 3′ tall and stolon development occurred along the deepest 7″ of the potato stems. The longest stolon recorded was not quite 12″ long. No berries were seed on this variety this year.

During the fall potato growing season these potatoes and the ‘Long Tall Red’ potatoes will be grown side by side for height and yield comparisons during the hopefully wetter and cooler part of the year.

In just a day or two the baby Luffa have definitely grown so now I am feeling confident that the flowers were fertilized and full-size luffa will hopefully, eventually, form. There are at least three forming on this single vine and the teepee holds perhaps a dozen vines emerging from 3-5 seeds originally planted there.

We are expecting day temps in the low 80’s with night time lows staying around 60. That should be just warm enough to keep the plants happy. Now I have to research the nuances of proper Luffa fertilizers. I’m making some compost tea for the squash. Perhaps they can be convinced to share.

Got a secret for growing great Luffa? Please leave hints and tips in the comments.

It must be August, because my squash leaves are starting to look pretty sad in places. I noticed the beginnings of a whitefly problem a few nights ago and tested a new do-it-yourself spray on a group of leaves. Two days later, the test leaves looked great, but the rest of the squash patch was starting to show more serious signs of infestation. Today I sprayed the top and bottom surface of every leaf I could find with evidence of whiteflies and then some. I’ll track the results in a few more days and update things here.

The varieties of squash in the patch are:

This last one was saved from ‘Waltham Butternut’ many years ago and kept going by a neighbor. It grew 25 foot vines with 10 fruit on a single vine in 2012. If some of that productivity crosses into my ‘Upper Ground Sweet Potato’ seeds for next year, maybe it will be a good thing!

The ‘Spaghetti’ squash is suffering the most from the whiteflies, though I first noticed it on the ‘Upper Ground Sweet Potato’ leaves. Maybe I didn’t notice it on the ‘Spaghetti’ squash because it’s harder to get to their part of the patch? The ‘Candy Roaster Melon’ is clearly the least affected. It’s much slower growing than the other varieties and is just now, in August, starting to flower. I have yet to find any research on differing vulnerability to whitefly across squash species, so the differences I see may have other causes. It is certainly too early to say that C. pepo is more likely to suffer whitefly infestation and C. maxim is more likely to fend it off—but that’s a theory that might turn out to be worth testing.

The spray that I made started with 1 Tsp of Dawn Advanced Power liquid dishwashing soap mixed into 1 cup of vegetable oil. This makes a concentrate that you then mix with water in your sprayer. Add 1 1/2 tsp of the concentrate for each cup of water you add into the sprayer. I mixed 3 cups worth at a time in my regular household spray bottle. Next time I will seriously consider a backpack sprayer. In order to control whitefly everything I have read emphasizes the need to spray both the tops and the underside of the leaves. This can quickly become a tedious and finger-numbing project with your average spray bottle.

Next year I will plan ahead. The U.C. Davis Integrated Pest Management site says, “Several wasps, including species in the Encarsia and Eretmocerus genera, parasitize whiteflies. Whitefly nymphs are also preyed upon by bigeyed bugs, lacewing larvae, and lady beetles.” Buglogical has additional suggestions to try. If I manage to establish populations of these good bugs in my garden before August next year, maybe we won’t see the whiteflies at all.

Do you have a whitefly cure that works well in your garden? Please share it in the comments. And if you have tried something that didn’t work, I’d like to hear about that as well.

The spray has had mixed results. The plants are still going, and new fruit is even being set, but there is noticeable damage from this pest on a number of leaves. Below is an example from the ‘Butternut’ patch.

The growing tips look healthy and you can see at least one young squash has been set during the Whitefly/Mildew invasion. But a number of leaves may have been too damaged to recover. And the nastiness is clearly spreading again. 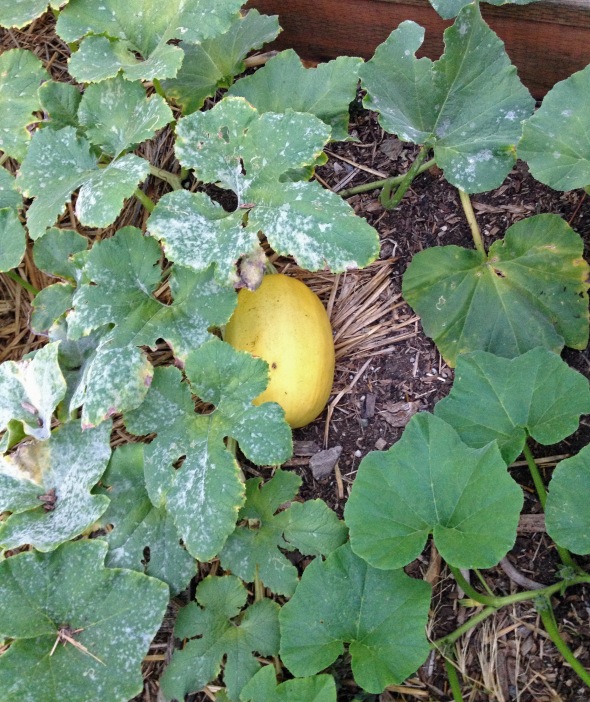 Both sets of leaves you see here are from the same Spaghetti Squash, one clearly much more affected than the other.

Only the few five-fingered leaves you see here are not from this plant. Seeing these leaves so close together, clearly growing in the same conditions, makes me wonder about the variability for disease resistance in these squash.