Started three pea varieites to see how they compare.  We did not use innoculant. Planted in Harvest Soil Ammendment with very shallow tilling. On 1/15 the seeds were not breaking through the ground yet but we did check and they are sprouting.

Started one square foot of Pisello Nano Picolo Provenzale 1″ deep, 1″ apart in a sunny spot with a tall cage around them.  Davis estimates that she planted 121 pea seeds in this bed. They are supposed to grow to 36″ and need support. 55-60 days would predict a first harvest the fist week of March.

Started one square foot of Freezonian 1.5″ deep and 1.5″ apart in a sunny spot near the Nano’s, also caged for support. Davis estimates that she planted 49 pea seeds in this bed. They are predicted to be 36-48″ tall. They also say 60 days to first harvest.

Started one square foot of Greensage sees from last year 2″ deep and 2″ apart. Davis estimates that I planted 49 pea seeds in this bed too.  It turns out that she planed in a different configuration than I did (I planted along the edges of the square and she didn’t–we learned a lot about calculating area!) so even though these seeds are father apart, they have the same number in that space as the closer together Freezoians. These are caged but predicted to be just 30″ tall.  They call for 70 days until first harvest.

No sign of peas coming up, so we carefully dug into the beds and found seeds sprouting in all three test beds.  They appeared to be at very similar stages of development, the peas had swelled, gotted lighter in color and yellow tipped shoots were starting to curl out of the center of the peas.

Freezonian peas are sprouting first, which is interesting, because they are the middle spacing and not the first section to get the morning sun either.

Peas are up in all three beds.  The Picolo Provenzale are ahead in number of sprouts and size of sprouts with 25.  Freezonians are right behind them with 20 sprouts. The deeper planted Greensage peas have only have seven sprouts poking up so far. 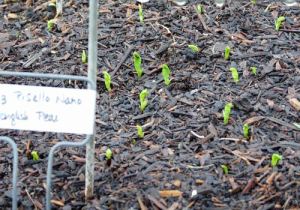 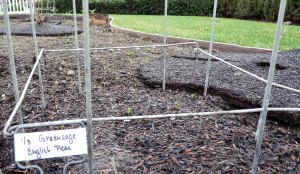 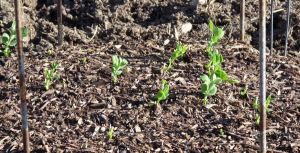 Freezonian Trail at One Month

The peas are up and growing slowly. The weather has been mostly dry but cool and we have had to water every day. Pretty unusual for our climate at this time of the year. We had some nasty wind that tattered some of the nearby broccoli leaves but didn’t seem to bother the peas.

Unfortunately, we are apparently not the only ones in the neighborhood who enjoy fresh peas. It seems that something is eating the sprouts poor little heads off when no one is looking! 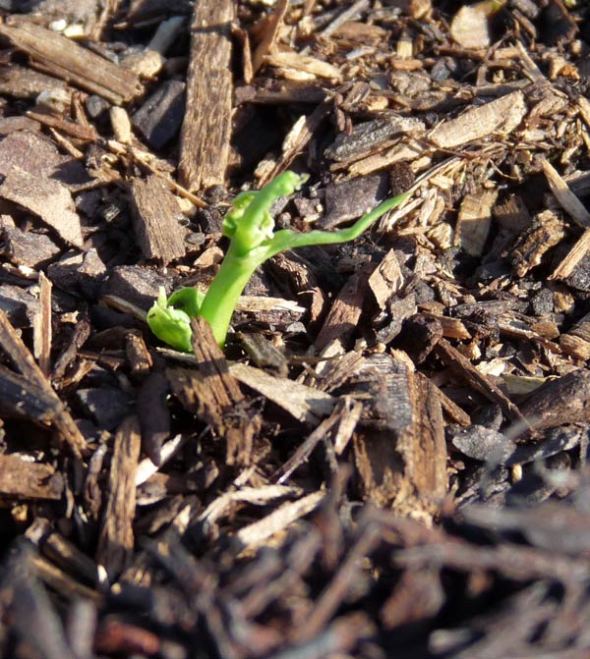 Davis has guessed that this may be hungry birds. We have filled up the bird feeder and devised a test to see if we can prevent this.  We found three identical lattice covers for the pea patches and covered half of each pea patch with the lattice to see if they will still grow in the shade cast by the lattice while being protected from the hungry whatevers that are eating them.

All the peas that are coming up in each of the three beds should be up by now.  There were ~120 seeds planted in the Picolo Provenzale bed and we now have 40 peas sprouting.  Davis was interested in testing this 3:1 ratio, so she started a sprouting jar with three seeds in it in the window sill and she is waiting to see what sprouts in the jar.

~ Fifty Freezonian peas were planted, giving us twenty sprouts, for a 5:2 ratio, which gave us some thinking to do when we tried to figure out how to get it down to how many peas would we need to plant if we wanted to be sure we would get one sprout?  Five seeds for every two plants is a small as that one goes.

It was really the third ratio that made our head’s hurt a bit.  The Greensage bed was also planted with ~50 seeds, and it yeilded 13 sprouts, which led to a long discussion of what a prime number really is and why the ratio is so big and can’t be broken down any smaller than 50:13.  (Tom rounded the numbers in a few different directions to talk through how a real farmer would ballpark it, but Davis and I decided it was more fun to leave it as 50:13 because it would be a bit absurd to read on the back of a seed pack.)

We’re not sure that the covers are actually helping the peas because both the covered and the uncovered peas look much less chewed this week. We are waiting for them to reach 6″ so that we can give them their first feeding of fish emulsion, but they have a ways to go still.

We seeded a new patch of Pisello Nano Piccolo Provenzale 1″ deep, 1″ apart right next to the existing patch planted January 3rd. This second patch will test whether or not the early start really gives us peas any sooner than just waiting until the last date of expected frost (February 19th in our area) and putting the peas in then. The peas are in a different brand of potting mix set on top of shallow tilled soil, just like the first patch. Right now we are not seeing any way the first set of peas could possible produce by March 4th, the estimated first day of harvest for this variety.

Yay! The new pea patch is starting to have sprouts! It’s time to cover them so they don’t get nipped by whatever the pea-eater sneaking into the garden is.  They will go under the black tray we used when the rest of the plantings were small.

Sadly, all is not well in pea world.  The Picolo Provenzale patch that was planted in the first round does have some pea plants in it, though they are still not the 6″ tall they need to be to have their first fish emulsion feeding.  There’s no way we are going to have a pea to eat from them by March 4th, just five days away. The Freezonian peas, which started so well, have been badly damaged by whatever is snacking on them and over half of the plants are unlikely to make it. And the Greensage peas are doing much better in the extra patch in the back yard than they are in the pea trail bed in front. They are small and though they seemed to benefit from the covers, they are not showing much growth. Next year we will know we need to plant a whole lot more peas if we want some to make it to dinner! 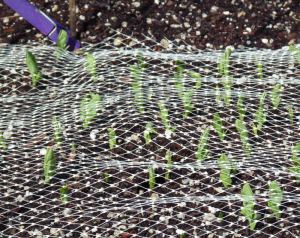 We planted the third, and final, patch of the Picolo Provenzale peas today, 63 days after the first planting at the beginning of the year. The first planting is now 6″ tall and will get it’s first fish emulsion feeding today. The patch planted 2/18 is doing well. They sprouted evenly with an 85% success rate and haven’t been eaten by anything–yet! They have been growing under a mesh onion bag that we cut open and attached to the growth support with clothespins.

The new patch is immediately ajacent to the February patch so the two can share a new burlap cover supported by a small cage. I’m hoping it will work as well for the sprouting peas as the onion bag did. 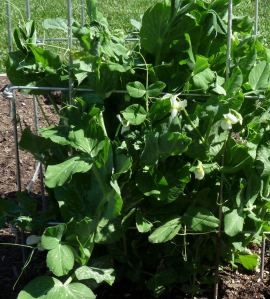 OK, so it took about 90 days to go from seed to flowers with the Picolo Provenzale peas. But the really good news is that the January, February and March plantings are all doing well and seem to be thriving now. The January and February patches have each had feedings of fish emulsion at about half strength to encourage growth and I expect to see tiny peas starting to develop any day now.

I can’t wait until we have peas fresh from our garden!!!

Today we picked our first Picolo Provenzale pea. The pod was about 3″ long and the peas inside were small but very sweet and delicious eaten right there in the garden with the Dirt to Dinner kids. The January 3rd Picolo Provenzale planting is covered in both pods and flowers, but the February 18th patch still isn’t blooming. Hopefully, the harvests will overlap. We’ll see how they do and make adjustments to our 2010 planting schedule based on what we learn.

One thought on “Spring ’09 Pea Trials”