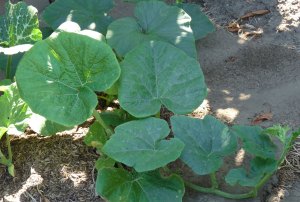 For the last week we have been battening down the Dirt to Dinner garden with various kinds of mulch to help it thrive in the hot weather. We are testing several kinds of compost, straight worm castings, tan bark and rice straw (which is cheap, soft, and easier to keep in place than I had feared.)

Even so, some of the squash plants still look unhappy by dinner-time. And days that threaten to see 90 degrees or better require watering morning and evening for some of the plantings, especially places where we have young plants growing or seeds starting for rutabagas, parsnips, etc..

Many of the plants seem to be enjoying the heat. The peppers are flowering. The tomatoes are happily turning red. The watermelons are busily climbing their supports. This vine, which I hope is a cucmber, seems undaunted by the temperatures. It’s a volunteer that turned up near the patch where I am trying to grow the new Luffa plants and some Bloomsdale Spinach which will appreciate the shade underneath. Whatever it is, it’s a robust deep green vine that looks like it may grow us something tasty.

Right next door to the Luffa, Spinach and their Mystery friend is the new Fort Knox bed where we are growing five different varieties of carrots and the parsnips under a 1/2″ wire cover and burlap shade where rodents can’t get into them and tear them up before we are ready to eat them. We were going to end up with some sort of betacarotene deficiency around here if we don’t find better ways to deal with our ‘guests’ than just the old burlap covers.

Spaghetti on the Vine

At least there seems to be no doubt that we will have Spaghetti Squash. The plants are bowing the bamboo pole that supports their trellis a little bit more each day.

Of course, I had to pick one early and cook it to be sure it really *was* Spaghetti Squash. I have another variety that I knew was Spaghetti Squash growing not to far from this one that clearly has no intention of climbing the trellis we have provided for it and the stems also look different, so I took a little convincing, but now there’s no doubt.

Still, I can’t seem to look at a Spaghetti Squash without thinking of my mother’s garden-inspired dinner creations which, she told us all the way through the 70’s, would taste, “Just like pizza!” if only we could actually be convinced to try them. Rest assured, I will not be making the kids try the recipe for Spaghetti Squash Lasagna that I saw on the Internet the other day.