On December 14th we seeded half a flat of ‘Guntmadingen’ Spinach in Ocean Forest potting soil. Ocean Forest isn’t perfect, but I’ve been happy with it and have used a lot of it this year.  Ocean Forest is a blend of worm castings, bat guano, Pacific Northwest sea-going fish and crab meal, composted forest humus, sandy loam, and sphagnum peat moss. Which brings us to the down-side, peat moss. I’m not sure how I feel about using it since it’s not renewable, most of it is imported long distances and it releases lots of carbon as it dries for harvesting. I need to research that to develop a more informed opinion.

My ideal would be not to need to use inputs like bagged potting soil but instead to make all our own compost and seed-starting mixes on site. It’s good to have a goal, but this one might be farther off than I would like since the garden keeps expanding.

Back at the spinach transplanting…

Roughly six weeks later, on January 22nd, we transplanted the best dozen spinach plants. They were all close in leaf size and root length. Six of the plants went into a container with more Ocean Forest potting soil on 6” centers. The other six went into an identical container in the same location with Ocean Forest potting soil on 6” centers. But, this group was also given additional worm castings by mixing fresh castings straight from the worm bins into the top 4” of soil before the spinach was transplanted. 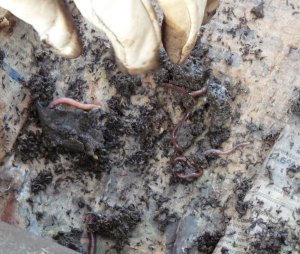 Worm castings have been shown to improve the activity of beneficial microbes in soil. I’ve seen some reports that 20% worm castings may be ‘ideal’ for flowers and vegetables, with additional worm castings not providing additional benefits. But since we don’t know what percentage of the Ocean Forest mix is already worm castings, we’re testing to see if adding our homegrown castings has a positive effect on plant growth.

Check back here to see how the trial progresses.