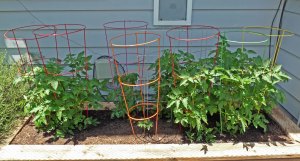 The first tomatoes into the ground this year were the ‘Principe Borghese’ drying tomatoes, four of them started from Bountiful Gardens seed, four from Victory seed. Six of the plants are doing very well, flowering and just beginning to set fruit. Two, one from each seed company but both planted in the same section of the bed, are smaller and less robust. They don’t appear diseased or I would pull them out rather than risk the other plants. If you have a guess as to why they are so much slower than their buddies, I’d love to hear it! 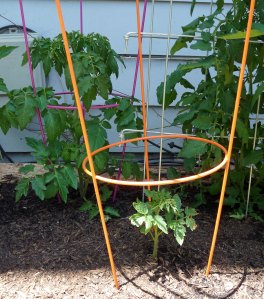 This crew was seeded in mid-March and the best plant from each source was planted in the garden May 1st, with compost, egg shells, bone meal and salmon heads. The tomatoes are approximately 3′ apart with some heirloom basil  planted nearby.  A second batch of strong, healthy seedlings, one from each source, are planted in a friend’s garden a few miles away. So far three of the four plants in the Dirt to Dinner garden are relatively uniform. The Landreth seedling has the largest diameter and the ‘Seeds of Change’ plant is slower growing than the other three, but they all look strong and healthy. The High Mowing ‘Cherokee Purple’ is my bet for the first to flower. Planted close to this trial is a ‘Cherokee Chocolate’ from Sustainable Seed as another point of comparison. It has already opened it’s first flowers, and they are huge!

The next tomato trial is a side-by-side comparison of ‘Orange Heirloom’ against ‘Persimmon’. Both are new varieties to us and the garden. We’re looking forward to trying them and hope to choose one to trial more fully next year. We are also comparing ‘Black Sea Man’ to ‘Black Krim’ and ‘Rosso Sicilian’ to ‘Costaluto Genovese’, which did very well for us in 2009. The ‘Costaluto Genovese’ makes deeply lobed fruit with an acidic, somewhat tart, robust tomato flavor. They were my top choice for slicing tomatoes until I met the ‘Cherokee Purple’.

We are also growing out five seedlings from Tom Wagner’s ‘Search for the Blue Zebra’ which we will compare with his ‘Green Zebra’ and ‘Black Zebra’ grown from Boondockers seed. These seedlings, just planted yesterday, are covered with 30% shade cloth for the first few days as they acclimate to the new garden bed. I have no idea what the Blue Zebra’s will be like. They may not be blue and they may not have stripes, but it’ll still be fun to see what we will get.

The other tomatoes in the garden are one each of  ‘Pineapple’, ‘Aunt Ruby’s German Green’, ‘Old Kentucky’, ‘Pruden’s Purple’, ‘German Pink’ and, my eating-out-of-the-garden favorite, ‘Blondkofchen’ which does not seem any too happy about the cool weather we are having this spring.

That feels like a lot of tomatoes all of a sudden, but it’s really only two dozen plants, or so.  OK, thirty, in this first batch. We’ll talk about the sauce tomatoes another day. It’ll be weeks before we have to find room for all of those seedlings.

5 thoughts on “Two Greens, an Orange and a Blonde: It’s Tomato Time”