I’m making Red & White potato salad for the 4th this year. Red, White & Blue potato salad sounds fun, but I know from last year that all three kinds of potatoes need to be cooked separately and the blues especially are complemented by different flavors than regular potatoes. Patriotic-looking food for July 4th is great, but if it doesn’t also taste good, forget it. And my ‘Red Thumb’ potatoes are already going to look pink at best as it is.

These 2.5 pounds of potatoes are part of the Great Potato Grow Out project, though it doesn’t look like this variety is going to be a candidate to move forward in our tests. The ‘Red Thumb’ potatoes were planted April 10th in Test Bed #3 and at their tallest stood maybe 32″ from seed potato to flowers. The highest stolons were lucky if they were set a foot above the seed potato. I pulled these particular potatoes for my potato salad because one of our other testers harvested their ‘Red Thumb’ planting today and found just a dozen grape-sized potatoes, weighing in at 3.25 ounces. I’m guessing some potatoes don’t like to be buried up to their necks in dirt after all. 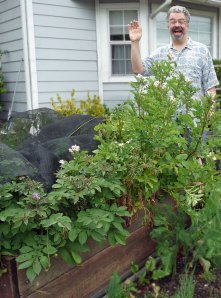 The tallest potato vines we’ve recorded here for the trial are ‘Guisi’ potatoes. Their beautiful white flowers are about 56″ from the seed potatoes below. I’m afraid there are actually longer vines in the trial but the ‘Guisi’ have such a nice, upright growing habit that it makes them easiest to measure. ‘Lumper’s Gold’ and ‘Satina’ are solid contenders in our patch as well. Then there are the ‘Muruta’ potato vines.  This trial plant is reported to be 62″ tall at this point with about 36″ inches of it covered in soil. That’s a good long section of stem to be setting stolons–if we’re lucky! No idea how it’s producing yet. Apparently it did flower but the vines are still strong and green eleven weeks after planting.

A number of my potato vines are dying down. The ‘Red Thumb’ vines were so limp they were hard to find. The latest  heat wave is certainly helping. But I should have harvested the ‘Norkotah’ potatoes before today. About a third of the potatoes in one of the bags were already sprouting while still firmly attached to their stolons underground! I’m planning to put them straight into potato bags of their own and let them keep growing in a spot that gets some afternoon shade to keep them cooler.

If you’ve got tall potato vines growing this year, I’d love to know what kind and how they’re producing for you in all this weird weather.