Now that the onions and fava beans are planted, I’ve started in on the potatoes. I know it’s not even January yet, but our average January temps are 42˚ F at night and 58˚ F during the day, so potato growing isn’t totally out of the question. I’m growing in containers, mostly grow bags, on the patio against a south-facing wall and I’m going to track the soil temperature, if I can find a gentle way to get the thermometer down there without spearing the developing potatoes.

I planted two large blue grow bags with ‘Atlantic’ potatoes. One bag got planting mix and compost, the other bag got acid mix and compost. I want to compare the two plants and their production because I suspect the soil mix I used last year may have been more alkaline than potatoes like. I did a similar test with the smaller black grow bags of ‘Yukon Gold’ set behind the ‘Atlantic’ bags. I’m also testing some red-skinned potatoes in the green grow bags the same way. I’ll do my best to water and feed them all consistently.

I also started an unidentified blue that I believe is leftover from the ‘All Blue’ planting several years ago in the front garden. There’s a bag of ‘Red Thumb’ fingerlings because they were sprouting so nicely I couldn’t leave them out. And a ‘Desiree’ seed potato in the large green container in the back. 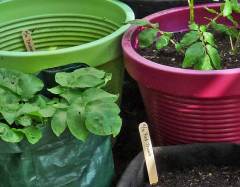 The first group of patio container potatoes were started October 30th, so they have been out there  nine weeks already. The potatoes in the green grow bag that are already leafing out nicely are ‘Amey Russet’ potatoes grown from potatoes I saved in 2011. This variety originally came from Tom Wagner at New World Seeds and Tubers. The leggy variety in the purple-ish container may be ‘Caribe’, though I won’t be really sure until we harvest them. The label must have slipped down into the container when I was adding soil mix. The black gallon container is growing an earlier planting of the mystery blues. I used the restrictive container because I am hoping to get lots of small potatoes for planting in the spring.

This is my third year growing potatoes through the winter. I chose a sheltered location this winter because last year the harvest was very small and there was considerable frost damage. But in 2010 we had a wonderful harvest in March from winter-grown potatoes.

Have you ever grown potatoes through the winter? Please share how you did it and which varieties worked well for you in the comments.

2 thoughts on “New Year in Potatoes”