In my quest to achieve new heights of garden nerdom, I have begun to compile a database of the seeds I am planning to use for 2011.   The first 122 hopefuls are listed by seed source, type, variety, year the seed was packaged for and any comments I have to add from previous years of growing them. Most of the seed is open pollinated, from small operations owned and run by actual people wherever possible. Some of the seed I purchase from a couple different sources so I can compare how each performs in the garden under our growing conditions. 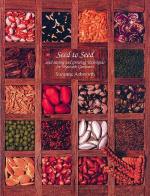 I’m growing open-pollinated seeds from Bountiful Gardens and Adaptive Seeds because I like the idea that I could save seed from year to year and eventually end up with a variety that has adapted to perform better in this area in the ways that matter to us. My mother-in-law handed down some of the family fava bean seeds to me this Christmas Eve. They have been adapting to growing in our Zone 9b location for at least 35 years, and to growing in nearby Santa Cruz for several generations before that.

The United Nations Food and Agriculture Organization estimates that 75% of agricultural crop diversity was lost during the 20th century. Think about that for a minute. The climate is changing at the same time the diversity of crops we are going to need to meet the challenge of that changing climate is being lost. Farmers all over the world used to save their own seeds, seeds that adapted to the local conditions, just like my in-laws saved their favas and basil seeds. But now enormous amounts of seed diversity are being lost and huge corporations are controlling, patenting and hybridizing seed resources. 25% of the world’s seed supply is already controlled by just three agro-chemical corporations. I think they can manage without the seeds growing in my yard too.