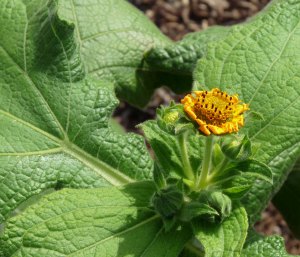 The tasty tubers are much bigger than the bright flowers

I apologize if it sounds a little sad to say that the yacon plant’s reward for making these sweet little flowers was that we ripped it out of the ground, ate it’s tubers and cut it’s roots into five separate sections before replanting them.  I couldn’t help it. It was delicious. Yacon, also called “Bolivian Sunroot,” has a crisp, fruity tuber that ads a satisfying crunch to salads and can be prepared a number of different ways. I bought this one on a lark from Pam Peirce when she was visiting Common Ground. Now that I have tasted them, I hope to have a stand of five plants next year. They can get as tall as 6′ and should make a nice visual break between the front garden beds and the street.

I brought in the last of the peppers, eggplant and Armenian cucumbers right after Thanksgiving. If you had to eat out of the garden right now in mid-December, you could have spinach, kale, chard, arugula, lettuce, green onions, a couple snap or snow peas, mustard greens, broccoli, cabbage (the loose leaf kinds anyway), rutabagas, turnip greens, chicory, sorrel, radishes, rosemary or thyme, and tomatoes. Seriously. I have tomato plants flowering and setting fruit, in December. I put the ‘Glacier‘ tomatoes my mother-in-law sent over in large pots, uncovered so pollinators could get to them, on the patio set against a south-facing wall. It’s a cozy spot, sure, but we had frost for days running a week or two ago. These tomato plants do not care. And who am I to argue?

This week the plan is to set out transplants we have grown of more arugula, chard, kale, Osaka Purple mustard, Chinese asparagus, winter leeks and mesclun mix. And to seed new flats of rutabagas and spinach. If I get to it before the rains come back, I’m going to try a stand of Alderman shelling peas near where I put in the Green Beauty snow peas. They aren’t in a well protected spot, but last year I had both snow and snap peas grow right through the winter. Frost got some of the pods, but the plants survived and flowered again.

All the weather folks keep telling me to expect an unusually wet and cold winter, which sounds an awful lot like the summer we just had, but I’ll believe it when I see it. Yesterday it was 65 degrees. Those tomatoes were probably sweating. ;-)